Computer Engineering vs. Computer Science: Which Degree Is Better?

Home » Computer Engineering vs. Computer Science: Which Degree Is Better?

You may know that you want a career in computing and technology, but you don’t know how to decide between computer engineering vs. computer science.

Computer science and computer engineering are both in-demand specialties in lucrative, growing fields.

Getting to know more about these two majors can help you determine which one to choose for your college studies.

On the other hand, computer scientists’ software runs on the hardware that engineers create.

What Is Computer Engineering?

Computer engineers work with the components and systems used in computing. That can range from tiny microchips to impressive supercomputers. Much of their time is spent with hardware and firmware. They focus on developing, testing, and improving these items.

After graduation, computer engineering majors may look for jobs in hardware, firmware, or software engineering. Common careers in the field also include network architect or systems analyst. Computer engineers may work in sectors like telecommunications or logistics.

What Is Computer Science?

Computer science is a mathematical field that applies algorithms and modeling to computing systems.

Computer science is both theoretical and practical. For example, computer scientists may investigate the theory of computation. Pondering abstract ideas like that can lead to finding solutions for real-world issues.

As a result, the field of computer science also includes practical topics like how to design networks, safeguard data integrity, employ artificial intelligence, and speed up computer processing.

The same companies often hire computer engineers and computer scientists. These two types of professionals typically handle different roles and responsibilities within those companies, though. Here’s a general overview of how the two job categories compare:

Although computer engineers are usually better known for their work with hardware, both computer scientists and engineers sometimes handle software responsibilities.

According to the Bureau of Labor Statistics, jobs in computers and information technology are growing at an 11% rate and pay a median annual salary of $91,250.

Although there are differences between computer engineers’ and computer scientists’ jobs, hiring committees aren’t always particular about the distinctions. Some companies may allow you to easily cross over from one category to the other.

Common places of employment are computer systems design firms and financial companies. These jobs have a 7% growth rate, and the median salary for computer systems analysts is $93,730 per year (Bureau of Labor Statistics).

Also called network engineers, computer network architects are professionals who design network communications systems. Depending on their responsibilities, they might recommend hardware for an in-office upgrade or deploy a worldwide cloud-computing system.

Jobs for computer network architects are growing at a 5% rate and pay a median salary of $116,780. These positions are common in telecommunications and computer systems design (Bureau of Labor Statistics).

Hardware engineers design the components that make computers run. They can also assemble them into functioning systems or plan upgrades to bring devices in line with the latest technology developments.

Top employers for this line of work include computer systems design companies, manufacturers, and research and development firms. The median annual pay for computer hardware engineers is $119,560 (Bureau of Labor Statistics).

Information security analysts are constantly on the lookout for cybersecurity threats and new ways to protect an organization’s data. They may run frequent tests on their systems.

Common sectors for employment include information, computer systems design, and finance. The median salary for information security analysts is $103,590, and jobs are growing at a 31% rate (Bureau of Labor Statistics).

Working in software development involves coming up with plans for programs that will meet users’ needs. Developers may design the parts of a program, make changes during the testing process, and prepare upgrades later on.

The median salary for software developers, quality assurance analysts, and testers is $110,140 per year (Bureau of Labor Statistics). Employment for these positions is expected to grow at a 22% rate over the next ten years.

Also known as IT managers, this role involves heading up an organization’s technology considerations. This may involve overseeing hardware, software, and data security as well as managing the staff and budget of the tech department.

Managers often report to the organization’s top executives. The median salary for computer and information systems managers is $151,150, and employment is projected to grow 10% over the next ten years (Bureau of Labor Statistics).

Although comp sci and comp engineering students often operate in similar realms, they approach their studies from two different angles. Checking out sample curriculum lists may help you understand the differences.

In addition, you can expect to have several classes in math and programming languages.

Should I Major in Computer Science or Computer Engineering?

There’s high demand for both comp sci and comp engineering professionals. When determining which major is best for you, it can help to consider your strengths and interests.

You may want to choose a computer science major if you:

You may want to study computer engineering if you:

Which degree program is harder has a lot more to do with your personal strengths than the inherent qualities of the majors.

On the other hand, computer science typically requires a high level of proficiency in mathematics. You’d typically engage with algorithms, statistical analysis, and other advanced math concepts.

While there are practical sides to computer science studies, students in this major often spend more time on theoretical concepts.

Is Computer Science an Engineering Degree?

Computer science doesn’t have the word “engineering” in its title, but many colleges do consider it an engineering discipline. For one thing, the program may be managed by a college’s school of engineering. Computer scientists also frequently engage in engineering activities. For example, they could participate in designing computer chips.

Computer Science or Computer Engineering, Which One Is Better?

One of these majors is not objectively better than the other. Both fields are essential for the development of new computing technology and products. In fact, computer scientists and computer engineers often work closely with one another.

According to data from the Bureau of Labor Statistics, job growth in both of these disciplines is promising. In addition, both the computer engineering and computer science fields are known for commanding impressive salaries that are well above the national average.

Getting Your Degree Online

Whether you decide to major in computer science or computer engineering, you’ll be developing in-demand skill sets for a growing job market.

If you’re ready to begin your studies in computer engineering or computer science, you can start exploring accredited colleges today to find the program that’s right for you. 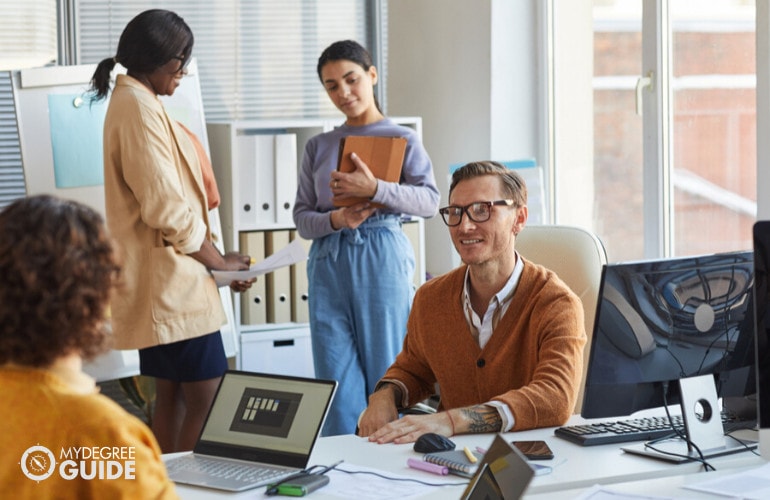 WRITTEN BY
Joy Cromwelle
Joy is pursuing her Ph.D. in Public Policy & Foreign Policy and holds a Master of Business Administration in Strategic Management, as well as a Bachelor's in Business Administration. Joy's focus is helping non-traditional students find accelerated degree options and credit for prior learning opportunities.
Last Update : November 30, 2021