by Joy Cromwelle
How long is a college semester? Learn about the different semester lengths, including your options for taking accelerated classes.

How long is a college semester? Learn about the different semester lengths, including your options for taking accelerated classes.

You may be nervous about committing yourself to four months of the same classes. The good news, though, is you have options.

How Long Is a College Semester?

Academic terms in college vary in length, according to the model the school uses. The most common organization of the academic year is Semesters, Trimesters, and Quarters. You may also enroll in accelerated online classes.

Schools that use the quarter system divide the academic year into four academic periods: fall, winter, spring, and summer.

The quarterly system divides the year into four sessions that correspond with the four seasons of the year. Each session is approximately ten weeks long.

Although not quite as common, some schools offer trimesters and include 12 week classes during the fall, winter, and spring.

Many schools using the trimester system also offer a summer session which makes this system similar to the quarter system.

A growing number of colleges, especially those offering online courses, allow you to enroll in classes lasting between five to eight weeks.

Currently, the most common accelerated course format is 8 weeks.

When enrolling in accelerated classes, you typically take 2 courses at a time, but some universities allow you to take 3 or more classes if you keep your GPA up.

If you take the typical two classes per semester and stay continuously enrolled, you may be able to earn 30 academic credits each year. If you take additional courses in a fast bachelor degree program, you might finish your degree at a quicker pace.

The types of degrees offered in an accelerated format tend to be those that do not include science labs as part of the academic requirements for graduation, such as biology or chemistry.

Which Is the Best Term Format?

There is no best term format. There’s only the best term format for you. Each of these options has its pros and cons. The trick is to examine each from all sides and see which one is going to fit your life and schedule best.

Semesters are the most widely used terms of study, but that doesn’t necessarily mean they’re the best option for you.

Here are some things to consider:

Because their term lengths are so close – 12 and 10 weeks respectively – trimesters and quarters have many of the same pros and cons, such as:

The biggest pro for accelerated courses is, of course, that you may finish far faster than you would through any of the other options.

If you prefer spending 15 weeks going deep in a class, then a traditional semester may be a better choice. However, if you find yourself ready to move on to the next class by the time mid-terms roll around, then accelerated classes might be a better option.

How Long Is a College Semester in Months?

A college semester is 15 weeks, which is just shy of four months. Typical trimester terms are three months, and quarters are about two and a half months long. Accelerated courses are usually finished in two months or less.

How Long Is a Semester in Community College?

Almost all community colleges are on the typical semester schedule, which means each fall and spring semester is a little less than four months long.

Summer semesters at most community colleges are optional, but if you choose to take them, you’ll usually be going about three months.

How Many Semesters In a Two-Year College?

If you take classes in both the fall and spring semesters, then you’re considered to have taken a full year of college at a two-year school. You may decide to take summer classes, as well, but they aren’t required.

There may be some benefits to taking optional summer classes though. These include:

If you’re a full-time student at a two-year school, you may earn your associate’s degree in two years.

How Long Is a Semester in University?

The length of a term at a four-year university will depend entirely on whether or not the university is on the semester schedule. If so, then the semesters offered at a university are the exact same lengths as those offered by community colleges.

However, if the university you’re attending is on a trimester or quarterly system, then the term lengths will be the same as those mentioned above for trimester and quarterly systems. The same is true if you’re taking accelerated courses at a university.

Many universities across the world use semesters, but there are some that don’t. For instance, Florida Gulf Coast University, the Universities of Toronto and Winnipeg and Leeds College of Music all use trimesters rather than semesters. Stanford, Dartmouth, and Northwestern are all examples of colleges on the quarterly system.

The different college degree levels don’t really have an impact on the length of a college semester. For instance, if you’re a full-time student at a four-year university, you may earn your bachelor’s degree in four years.

How Many Semesters Are in a College Year?

Semesters: If you’re attending a university on the semester schedule, a college year for you will be considered two full semesters – fall and spring.

Quarters: If your school is on the quarterly system, you’ll have to attend school all four semesters, or year-round, to complete a full college year. This includes mandatory summer courses.

Trimester: For schools using the trimester system, you’ll be required to take three semesters, including the summer, to achieve a full year.

Accelerated Courses: If you’re in an accelerated program, you won’t necessarily have a full college “year.” Instead, you can attend classes year-round.

How Long Are Four Semesters in College?

If you go to school at a college or university on semester schedules, then four semesters is usually two spring and two fall semesters.

If you’re a full-time student who takes between 12 and 15-credit hours a semester, you may earn enough credits to be awarded your associate’s degree after four semesters.

This isn’t always the case, of course. For example, if you swapped majors midway through college or if you took a lot of extra “fun” classes that didn’t go towards your degree, then you might not have earned the right credits to get your degree.

However, if you’re taking classes relevant to your degree and don’t swap disciplines, then four semesters – two years – is often enough to earn an associate’s. If you took full-time classes in the summer, as well, you might even graduate early.

How Long Are Two Semesters in College?

How much credit you receive for two semesters in college depends entirely on the college you’re attending and what type of scheduling system it uses.

Semesters: At these institutions, two full-time semesters will give you one year of college. You’ll be halfway toward your goal of an associate’s degree.

Trimesters: Two terms on this system will be 2/3rds of a year. In order to receive a full year of credit at a school like this, you’d need to take the summer courses, as well.

Quarters: Because schools on the quarterly system require you to attend four sessions as a full-time student in order to receive a year’s worth of credit, two sessions at these schools will often give you the least amount of college credit.

Attending only two terms on the quarterly system means you’ve only received a half a year of college credit.

How Long Are College Classes?

There is no hard and fast rule when it comes to how long college classes actually are. Most courses provide you with three hours’ worth of college credit, which means you take the class for three hours a week.

If you take classes two days a week, such as on Tuesdays and Thursdays, then each class is usually an hour and 15 minutes long, adding up to just shy of three hours each week of that class total.

If you take classes three days a week instead, the classes are usually 50 minutes apiece, again adding up to just shy of three hours total.

Other classes, though, may be longer or shorter, depending on how many credit hours they’re worth. For instance, labs for science classes are usually only held once a week, but they’re also about three hours long per class.

A freshman orientation class might be an hour per class, but it is often only held once a week.

What Are the Normal College Semester Dates?

When people talk about “normal college dates,” they’re usually speaking of colleges that are on the traditional semester schedule. For these particular colleges, the term dates are as follows:

Colleges on other types of schedules will have different start and end dates. If you’re ever in doubt about the dates for your school, look up their school website. There is almost always a calendar that provides you with all the important dates you’ll need.

So, How Long Is a Semester in College?

But as you can see, there are definitely other paths for you to take if your schedule doesn’t mesh well with the semester schedule.

If you’re looking for something quick that doesn’t require such a long time commitment, check out colleges and universities online and see what types of accelerated degree programs they offer.

This may be a great way to achieve higher education without investing more than five to eight weeks into each course.

Do your research and choose the best educational path for you. That might immediately help put you on the road to success from day one. 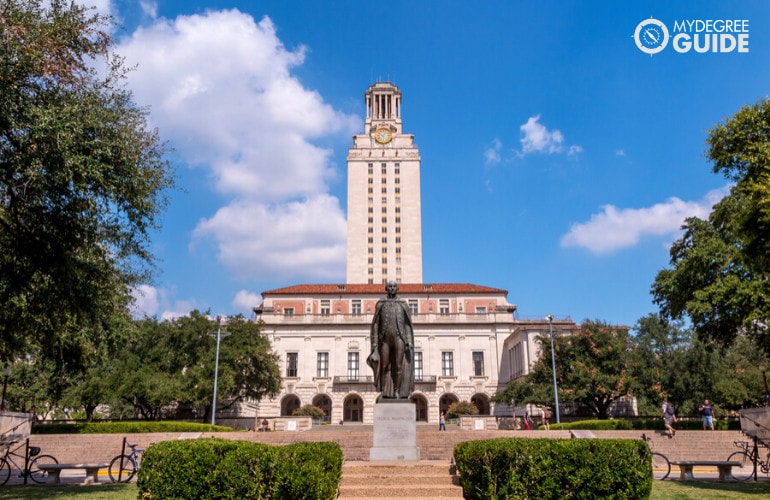 WRITTEN BY
Joy Cromwelle
Joy is pursuing her Ph.D. in Public Policy & Foreign Policy and holds a Master of Business Administration in Strategic Management, as well as a Bachelor's in Business Administration. Joy's focus is helping non-traditional students find accelerated degree options and credit for prior learning opportunities.
Last Update : November 06, 2022