What Can You Do with a Masters in Political Science? [2022 Guide]

Home » What Can You Do with a Masters in Political Science? [2022 Guide]

What can you do with a masters in political science? A masters in poli sci helps you access a number of different career options relating to government administration, advocacy, research, and public policy.

Political science graduate programs may prepare you to understand American politics, international relations, comparative politics, and political theory at an advanced level. You may then be able to apply that knowledge to impact political structures and public policy at a state, national, and international level.

What Can You Do with a Masters in Political Science?

With a masters degree in political science, you may be qualified for several rewarding career options that allow you to work in different areas of business, government, and nonprofit.

You may pursue job opportunities in social advocacy, urban planning, government administration, public policy, news media, research, economics, and public relations. Positions in the field of political science may require you to work within the context of political theory, international relations, comparative politics, or American politics.

More specifically, careers in political science may allow you to play a key role in the planning, development, and implementation of laws and regulations that impact American society at a state or national level.

You may also have the opportunity to perform research on various political science topics, analyzing public opinion and forecasting trends related to politics and society at large.

Some positions may allow you to monitor current events in society at a local, national, and international level, paying special attention to those which impact or are impacted by politics and policy.

Political science masters programs may also prepare you for positions related to social advocacy. This field could include women’s rights, racism, healthcare, accessibility, trade, environment, and immigration, among others.

Other opportunities may include working as a lobbyist for various interest groups or within a local municipal, state, national, or international level government structure.

5 Things You Can Do with a Masters in Political Science

There are a number of career paths available to you with a traditional or online master’s in political science. Some of these careers include political scientist, urban and regional planner, policy analyst, news correspondent, and economist.

As a political scientist, you may have the opportunity to work closely with government administrations and political institutions. You may contribute to the development of public policy through research and development.

You may also play a role in the analysis and interpretation of public opinion concerning economic, social, and political events, along with advocacy of social and political issues. As a political scientist, you may also contribute to the development and testing of various political theories in the field.

The position of urban and regional planner may allow you to work with government officials, developers, and contractors. You may also participate in the revitalization of communities through social, economic, and environmental solutions, including land use.

You may consult with members of the public to collect opinions on projects, problems, and solutions. You may also oversee a project’s budget and ensure that project details are in line with relevant policies related to land use, community development, and historical preservation of structures.

As a policy analyst, you may play a key role in monitoring and assessing current events as well as social and economic issues within society.

You may also participate in research, planning, and development of public policy and government legislation at a state, national, or international level. Your responsibilities may include evaluating the overall effectiveness of political policies and programs and measuring their effectiveness through changes in society.

This could include changing perspectives and needs related to social, environmental, economic, and political changes.

As a news correspondent, you may need to stay up to date on current events, social change, and public opinion. You may then summarize and explain these topics to a mass audience through various media, including print, television, and radio.

You may be responsible for providing informed analysis and opinion on a range of topics, depending on your area of specialty. Examples may include the American political structures, elections and the voting process, international politics, social reform, revolutionary movements, and comparative politics.

As an economist, you may conduct research and stay up to date on various national and global economic issues. You may pay special attention to topics related to employment, spending, wages, business cycles, healthcare, and energy.

You may also advise businesses and government bodies on economic issues, policies, and programs. When appropriate, you may be asked to present recommendations to resolve these issues.

According to the Bureau of Labor Statistics, there are a number of lucrative career paths for a traditional or online degree in political science, many of which require a masters degree.

Many careers in the field of political science are expected to experience a positive job outlook through 2029, according to the Bureau of Labor Statistics. These career paths include political scientists (6%), public relations specialists (7%), urban and regional planners (11%), and economists (14%).

Is a Masters in Political Science Useful?

A master’s in political science can help you develop a more advanced and in-depth understanding of American politics, international relations, political theory, and comparative politics.

Additionally, many positions in the field of political science, including political scientists, urban and regional planners, and economists, require a masters degree as an entry-level educational requirement.

What Are the Best Masters in Political Science Jobs?

There are a number of different career options available to you with a master’s degree in political science. Common positions include political scientists and policy analysts.

Political scientists earn an average of $125,350 per year, and that average increases for those working in professional, scientific, and technical areas as well as within government.

Some of the responsibilities for this position include performing research on various political topics, testing political theories, and evaluating political trends. You may also develop future forecasts and support the policy development process.

Policy analysts have a more narrow focus than political scientists. In this role, you may specialize in the planning, development, and implementation of regulations and laws across various levels of government.

What’s the Difference Between a Masters in Political Science vs. Public Policy?

Masters in political science programs are closely related to masters in public policy programs, and in some cases they may cover similar content.

A masters in political science focuses more on areas of public administration, governance, and political theory. These programs generally stick to a high-level overview of public policy.

In addition, a masters in public policy generally provides a more in-depth look at the planning, development, and implementation of laws and regulations.

Is a Masters Degree in Political Science Worth It?

Yes, a master’s degree in political science is worth it for many students. In the life, physical, and social science field, jobs are projected to grow at a rate of 5% in the next 10 years (Bureau of Labor Statistics), faster than the average overall job growth.

Getting Your Masters in Political Science Online

Working in the field of poli sci offers a range of employment opportunities, from government and businesses to nonprofit organizations. An online masters degree in this field may provide you with a variety of experiences throughout your career.

Positions in the field of political science may offer you promising career growth and high earnings potential with above-average annual salaries.

If you want to contribute to governance at a state, national, or international level or want to advocate for a particular cause as part of your career, then earning an accredited masters degree in political science may be a strategic path for you to consider. 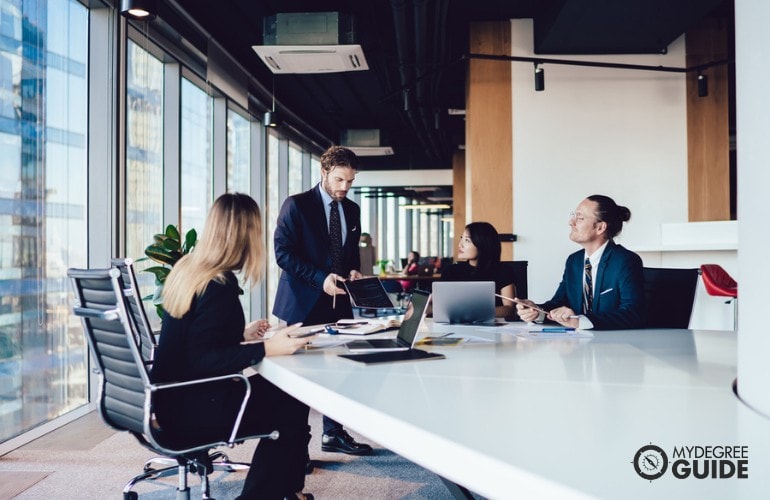 WRITTEN BY
Brenda Pyzik
Brenda has a bachelor’s in sociology from the University of Waterloo, with a minor in legal studies. She obtained a graduate certificate in human resource management from Georgian College. Brenda focuses on employment, business, and training and development.
Last Update : November 23, 2021