Is college worth it? Is a college degree worth incurring significant debt?

Every week you walk on tiptoes around your boss, hoping that this is not the week when your name lands on the dismissed list due to budget cuts and mass layoffs. 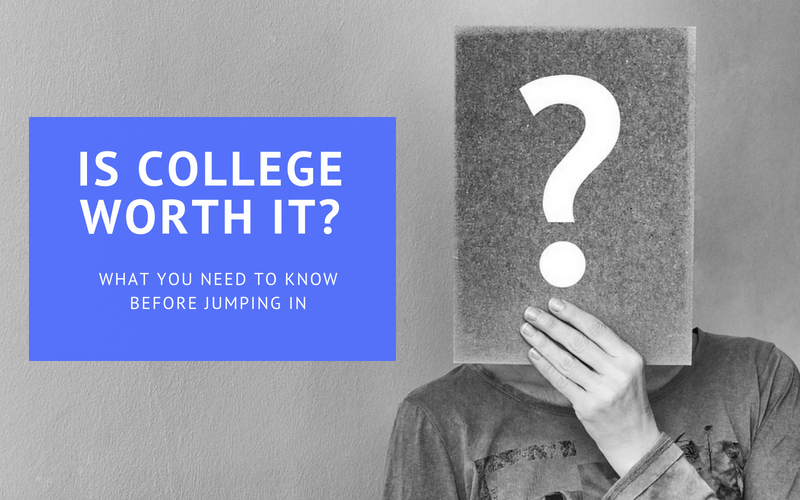 There’s gotta be a better way to do this! You’re right.

Your life doesn’t have to be an endless slog from one weekend to another. You are ready for success. But what is it going to take?

Honestly, hard work and determination. But you are ready for it. You are the kind of person who is ready and willing to do the hard things to succeed.

So you survey the landscape, to get an idea of what you need to do. You can switch jobs, and hope that this one is better than the last one. You can take on a side hustle like Uber to pad out your paycheck until you hopefully get that raise. Or you can invest in yourself, and get a college degree to increase your income and provide greater job security.

What’s It Going to Cost to Go to College?

Of the three options, a college degree sounds like the best strategy.

But I have never seen a neon light advertising-free tuition at any college, and believe me, I’ve looked! So how much can you expect to pay to get a college degree?

And not so much.

I hate to say this, but it all depends on where you go!

Housing costs can vary significantly from region to region and must be taken into account when you are creating a final comparison between colleges. Room and board at the University of Hawaii, for instance, costs an average of $13,000 annually while Northwestern Oklahoma provides a year of room and board for about $4,630. Though you’re living in Hawaii, so maybe the extra 8 grand would be worth it come December?

But let’s say you hate sunshine and sandy beaches, so we’re going to cross the University of Hawaii off the list of potential colleges.

According to Statista, the average cost of attendance (including tuition, books, and room and board) at a four-year publicly funded in-state college is $20,770 U.S. dollars for 1 academic year.

If you live in an area with a phenomenal state college, such as the University of Michigan (1 of the top-rated public US universities according to the QS World University Rankings®), then this is an open-shut case. But what if this isn’t the case? What are the other options for obtaining a college degree?

(Source: The CollegeBoard. *Using Columbia College of Missouri as an example – $290 per credit hour)

Is College Worth the Cost?

After analyzing the various options for obtaining a college degree, you are asking yourself if it’s even worth it.

Because $11,000 to $45,000 a year for tuition adds up quick when you are working to make rent payments and keep food on the table.

But just like a stock market investment, investing in your education is a long-term game. 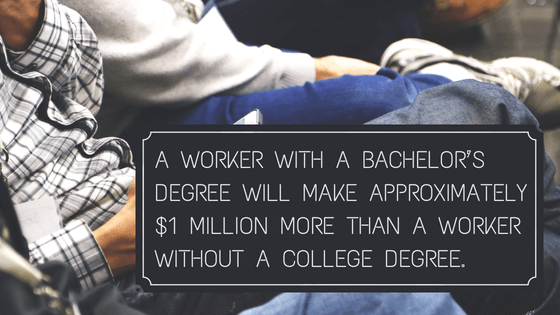 Across the board, over the course of their lifetime, a worker with a Bachelor’s degree will make approximately $1 million more than a worker without a post-secondary degree.¹

I could use an extra million dollars in my life, how about you?

But that’s not all.

With the changing times and our current economy, job security is vital. College graduates who hold a Bachelor’s degree earn 66% on average more than their less-educated colleagues and are also far less likely to be unemployed long-term.²

Adding to the necessity of a college degree, by 2020 an estimated two-thirds of job openings will require postsecondary education or training.

These are some jaw-dropping facts.

Don’t want to spend the next four years in college? You don’t have to! Some of the fastest degrees being offered these days are online in a wide range of fields. With a little planning and a lot of hard work, you may even be able to finish your bachelor’s in just 2 years.

When you realize that you can finish college faster than you thought was possible, the idea of earning one to increase potential lifetime earnings is starting to sound like a very sound investment!

How Much is a College Degree Worth?

An extra million dollars in your bank account at the end of your career sounds extremely attractive.

But ask any elementary teacher if they are rolling around in their excess cash, and you will get laughed right out of town.

Because not only does a degree set you up for success, but getting the right degree. For a more in-depth look, check out our article on fast degrees that pay well.

Every degree has a different return on your investment, and those variables need to be weighed carefully.

Source: Time Magazine’s Here’s What the Average Grad Makes Right Out of College

So if you are looking to get the most bang for your literal buck, then you will want to consider pursuing a degree in STEM (Science, Technology, Engineering, Math) rather than an arts degree.

Still curious? Here’s a list of the top 20 highest paying bachelor’s degrees if you want to dig deeper.

What is the Long-Term Gain of a College Degree?

Perhaps you are not in the place to go to school full-time for the next 4 years. Is there any benefit to upgrading your education, if you can only do a year or two of college?

Whether you are able to invest a little or a lot into your education, every bit counts.

Even if you are only able to take one or two courses a year, and are not able to complete a post-secondary degree, it will impact your financial bottom line. Workers who have some post-secondary education without obtaining a degree can expect to make about $38,700 annually. This equals into an additional $250,000 in lifetime earnings.

But it doesn’t have to stop there, the increase in salary continues as your level of education rises.

If you complete an Associate’s degree at your local community college, you stand to make nearly one third more than a worker with only a high school diploma. Securing an Associate’s degree will cause your lifetime earnings to swell by $450,000 over someone who does not have a post-secondary education.

Well, What’s in it for Me Personally?

You’ve weighed the argument back and forth, and it seems heavily weighted in favor of getting a college degree. The money’s good, the prestige, and job security are valuable.

But you’re not just about the money.

You need to know that a degree is going to be good for you, from a holistic perspective.

Are there any easy college majors?

Yes, some college majors are generally considered to be easier than others, but it depends on your likes and dislikes.

Do you like the idea of getting a college degree, but aren’t sure you want to pursue a science or math degree? We totally understand.

That’s why we have assembled a list of easy college majors.

Benefits of a College Degree

A college degree provides 4 essential benefits, that have nothing to do with your earnings.

Having a career that is personally satisfying is often the result of your own sweat equity. You’ve invested in this degree, and brought it to completion. 89% of people with a Bachelor’s degree attest to having a feeling of job satisfaction.

We have all seen the anti-smoking ads, and are aware of the health costs of choosing to smoke cigarettes. However, a post-secondary degree takes that understanding to heart and reduces your propensity to smoke cigarettes by 15%. Take that lung cancer!

Perhaps due to increased exposure to the arts while studying, if you have a Bachelor’s degree, you are more likely to read books daily and attend concerts twice a month then if you only have a high school diploma.

In the 1996 election, only 26% of high school graduates voted in the presidential election, compared to 42% of post-secondary graduates. These days, every vote counts, and those who have a college degree are more likely to take their responsibility to heart and participate in civic elections.

What If I Decide Not To Get A College Degree?

I can understand the temptation to walk away from your dreams of a college degree. Investing years of your life and huge sums of money when you are just trying to keep one foot in front of the other is nerve-wracking.

But what happens if you don’t take this opportunity?

What happens if you decide to stay on with your current employer and just keep your head down and work this job till you retire?

Maybe it will work, and you won’t have to put in the effort to improve yourself. It’ll be good enough. 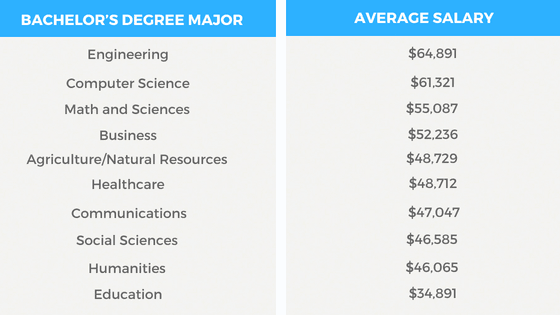 But maybe it won’t work.

Whatever the case, you’re unemployed, and you only have a high school diploma and an Employee of the Month certificate to open doors for the next job.

Georgetown University forecasts that by 2020, 65 percent of all jobs in the economy will require post-secondary education and training beyond high school.

That means your odds are against you to secure another job that will pay a living wage, with only a high school diploma.

This might not be the “right time” when it’s easy to make the leap into a college degree. But that doesn’t mean its the wrong choice. Waiting until everything lines up can leave you lining up in the unemployment line, wondering why you didn’t jump for it earlier.

Choose to invest in you. It’s worth it.

The opportunity lingers before you. Do you take the leap into higher education? You deserve the chance to better your future. Choose you.