Is Computer Science a Good Major?

by Joy Cromwelle
Is computer science a good major? With a median pay of $91,250 and job growth of 11% in the computer and IT field, yes, it is a good major. 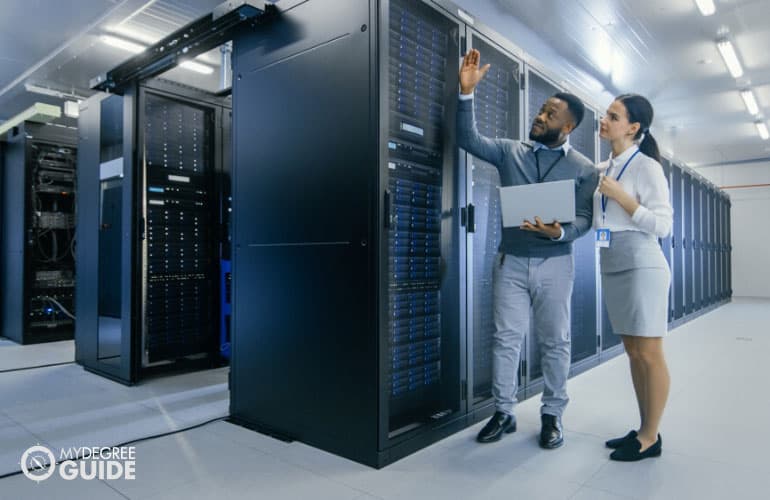 The pay is competitive, and job growth for the industry is faster than the national average, according to the Bureau of Labor Statistics.

A traditional or computer science online degree could be a very worthwhile investment for the future.

Courses for a Computer Science Major

What really makes a computer science degree valuable is that you can expect to learn many different subjects throughout the program. The basics will revolve around computing, of course, but depending on your interests and specializations, you could wind up studying everything from biocomputation to artificial intelligence. Here’s a list of common courses and the subjects that they cover that you may take:

Computer Programming: Computer programming courses discuss the structure of computers and how they work. They cover algorithms, networks, databases, and operating systems, and provide an introduction to programming languages like HTML and CSS. If you’re interested in coding, the latter is a must.

Cybersecurity: As the world grows increasingly digital, there are more and more threats to the sensitive information that’s stored within computers. Cybersecurity classes teach how to protect data from those who would exploit it. You can learn about the forensics of digital systems and how to protect files, encrypt networks, assess risks, and thwart hackers.

Discrete Mathematics: Discrete mathematics isn’t a branch of math like algebra or calculus. Instead, it’s a specific kind of math that can be applied to different branches, and it involves things like sequences, relations, functions, algorithms, number theory, matrix theory, and more. It’s very common in computer science, so many degree programs will require it.

Database Administration: Database administration is an entire field of study. You can even get a degree in it. If you just want some skills for a career in computer science, however, you can take classes in general database administration. They’ll cover topics like cloud computing, electronic commerce, data analysis, and decision support systems.

Information Technology (IT): Information technology is another wide-ranging field with its own degree programs, but it can also be a specialization for computer science majors. It requires good problem-solving skills and strong attention to detail. Topics might include everything from operating systems to programming languages.

Web and Software Development: There’s a big market for developers, so whether you’re interested in creating apps, coding websites, or troubleshooting for software programs, these kinds of courses can help you build career skills for the future. They range from basic to advanced, depending on your skill level.

There are a lot of benefits to getting a computer science degree.

The most obvious perk is money. According to the Bureau of Labor Statistics, many computer science jobs are worth more than $100,000 per year, and the top earners in the field can take home almost $200,000 per year. This is especially true of professionals who are working in-demand jobs.

For example, the median pay of a computer and information research scientists is $126,830 per year. But when you look at the different fields that these scientists can be employed in, the average pay can reach $145,920 per year:

Another nice thing about computer science is that it’s a very hot industry with thousands of new jobs coming on the market each year. Its growth rate is 11%, and that’s just the average for the entire industry.

Individual jobs like information security analyst have growth rates of more than 31%.

Last but not least, a computer science degree will qualify you for work in many different fields. You don’t have to lock yourself into a specific career. Depending on your interests and qualifications, you can shift between jobs, skills, companies, and even industries.

While a degree in computer science can be quite lucrative, there are also a few drawbacks to consider.

You might be surprised at some of the things that you’ll need to learn. For example, your cybersecurity class might teach you about quantum cryptology for better protection against hackers.

Mathematics is another big part of computer science degrees, so if you aren’t good with numbers, you’re going to struggle with calculus, probability, discrete mathematics, and mathematical foundations of computing. Or, on the other hand, you may consider accounting vs. computer science if you’d rather focus your education mostly on the mathematics area.

Computer science is also a field where you’ll need a lot of motivation to carry you through the demanding work. Almost 60% of tech workers report feelings of burnout, and the dropout rate in computer science programs is more than any other college major.

Some people would argue that you don’t even need a degree in computer science to be successful in a computer science field. Entrepreneurs can make millions of dollars with apps and software systems that they create themselves.

All things considered, however, it’s dangerous to focus on money at the exclusion of all else. If you have a true passion for computer science, it can be worth it to get a degree in the subject.

It can give you a much better chance at a stable, high-paying career and teach you the difficult but necessary subjects that you need to succeed.

What Can I Do with a Major in Computer Science?

A computer science major can open doors in many different fields.

If you’re good with science and technology, you might enjoy a job as a programmer, data scientist, network administrator, or information systems manager. These are all desk jobs that involve heavy computer use as you solve problems and manage projects.

Are you the creative type? Computer science jobs don’t have to be boring. Every industry needs computer experts, including those devoted to movies and video games, so you can have a fun and dynamic career as a digital marketer or mobile applications developer.

You can even go the entrepreneurial route and become a freelancer who invents or designs new things.

Another possibility is working with your hands. If you combine computer science and engineering, you can become an expert in computer hardware, industrial design, or server infrastructure.

You can build computers from scratch as a developer, or you can troubleshoot issues with gadgets and gizmos as an IT technician.

Here are a few common jobs for computer science majors and their average pays, according to the Bureau of Labor Statistics:

Keep in mind that these are all median salaries. Your exact pay will depend on things like education, experience, industry, job title, and geographic location.

Professional Organizations for Those with a Computer Science Degree

Professional organizations can be a great resource for computer science majors. Not only can they help with schooling and skill-building, but they can also provide support, advice, mentorship, and job opportunities after you graduate.

There are other organizations that can support your computer science studies as well. It’s just a matter of finding them and utilizing their resources to prepare you for the workforce.

Accreditation is a review process for colleges. It proves that they meet objective educational standards, and it qualifies them to receive federal financial aid.

There are six regional accrediting boards for colleges in the United States. They’re divided into different groups defined as Southern, Western, Northwest, North Central, New England, and the Middle States.

For example, the Northwest Commission on Colleges and Universities (NWCCU) covers the states of Utah, Oregon, Washington, Idaho, and Alaska.

There are also accrediting boards that are meant specifically for computer science and other related fields. The biggest is the Accreditation Board for Engineering and Technology (ABET), which is divided into four branches:

However, the lack of an ABET certification shouldn’t be an automatic deal-breaker. There are award-winning programs offered at some of the best universities for computer science like Stanford and Berkley that don’t have ABET certification. As long as the school is regionally accredited, you’re good to go.

Financial Aid for a Bachelor’s in Computer Science Online

The best source of financial aid is the Free Application for Federal Student Aid (FAFSA). It offers grants, loans, and work-study opportunities, and it doesn’t cost a dime to submit your paperwork for consideration.

If you need more than what the government can offer, you can also look into scholarships. There are general scholarships offered to low-income or high-performing students, and there are also industry-specific scholarships meant for students within a particular major.

As a computer science undergrad, you might be eligible for the following:

There are other scholarships to seek out, as well, such as the scholarships for women in STEM related degrees that some universities and organizations offer. Don’t be limited by these suggestions if you need help funding your computer science degree.

Here are our answers to a few more questions you might have regarding earning a computer science degree online.

What Is the Best Major in Computer Science?

If you’re majoring in computer science, you can concentrate your studies on several different areas of interest:

Some schools offer these studies as voluntary minors or degree concentrations. Others will require you to choose a specialization.

As for the “best,” it all depends on where you’d like to work after graduation. Take a look at the job requirements of a career that interests you. What degrees do these professionals have? What skills do hiring managers find desirable?

Is Computer Science a Hard Major?

Computer science is a very demanding subject. You’ll be studying at the crossroads of math, science, and technology, and classes will cover everything from programming languages to advanced number theory.

Things get even more complex if you specialize. If you’re interested in data analytics, for example, your course list could include everything from “Statistical Modeling” to “Linear Regression in Data Science.”

Simply put, you should expect to work hard as a computer science major.

Is There Any Reason Why You Shouldn’t Major in Computer Science?

There are a few reasons why you might not want to study computer science. The primary reason is the difficulty of the subject; lots of students burn out, so you’ll need a strong and dedicated interest in whatever you’re learning.

You can also make money in computer science even without getting a degree, but you should know that the Mark Zuckerbergs of the world are rare. It’s usually worth getting a degree for the career stability that it can offer.

Is Computer Science for Me? 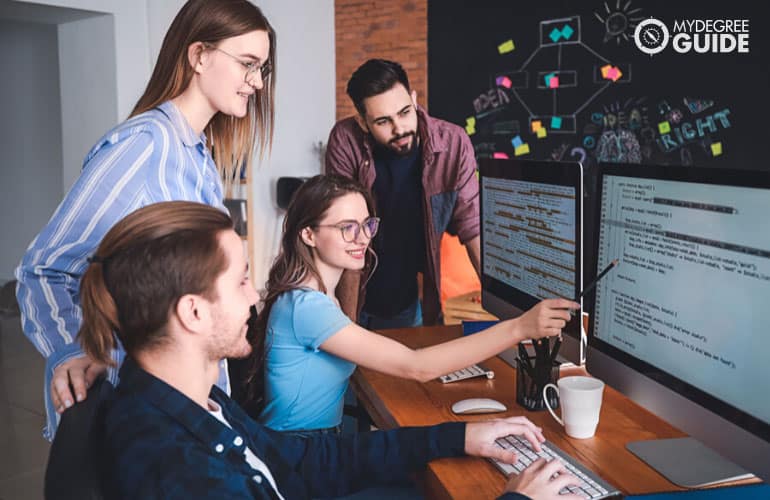 Do you have a genuine love for computer science? Are you willing to put in several years of hard work to help ensure that you’re eligible for high-paying jobs with good growth opportunities?

WRITTEN BY
Joy Cromwelle
Joy is pursuing her Ph.D. in Public Policy & Foreign Policy and holds a Master of Business Administration in Strategic Management, as well as a Bachelor's in Business Administration. Joy's focus is helping non-traditional students find accelerated degree options and credit for prior learning opportunities.
Last Update : September 06, 2022