What’s the Difference Between College and University? [2023 Guide]

Home » Types of Degrees » What’s the Difference Between College and University? [2023 Guide]

by Joy Cromwelle
What's the Difference Between College and University? The terms university and college are often used interchangeably, but they are not the same.

What’s the difference between college and university?

I know, I know. College, university. It’s all the same, right? Well, yes and no. 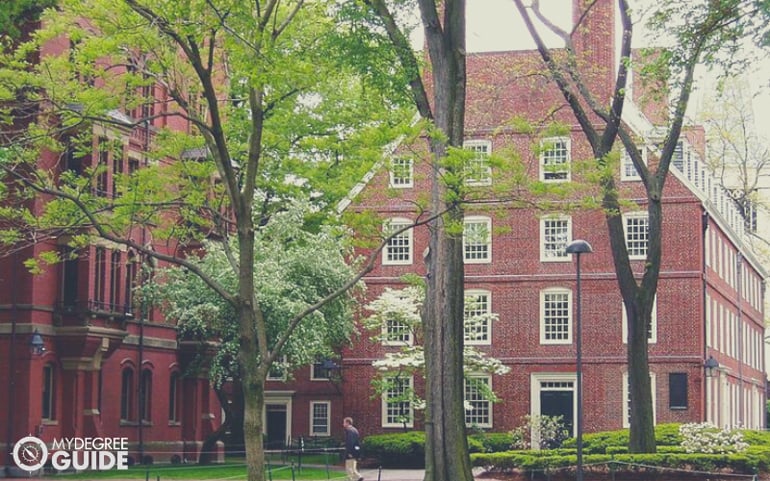 The terms college and university are often used interchangeably here in the United States. Generally, people use both terms to refer to any institution of higher education.

What Is the Difference between a College and University?

But there are exceptions to this rule!

What Is a College?

A college is an institution of higher education that focuses on undergraduate degree programs. That is, they may offer 2 year associates degrees or 4 year bachelor’s degrees, but typically do not offer graduate level programs such as a master’s degree or doctorate degree.

At the college, there is a wide range of majors offered to undergraduate students.

Colleges come in all shapes and sizes.

When comparing colleges, there are several types, including:

It’s easy to see why so many people are confused about the differences between a college and a university!

For example, Penn Foster Career School is a college that offers undergraduate programs leading to a diploma, certificate, or an associate’s degree. Some might refer to Penn Foster as a college or even a university, but since they do not offer graduate level degree programs like master’s programs and doctorate degrees, they are not a university. The school is a college, but most refer to these types of schools as a career school or a technical school.

Colleges are generally smaller in terms of enrollment and degree offerings, but that is not always the case. Larger colleges such as Columbia College offer dozens of undergraduate programs. But your local community college may only offer a few associate degree programs.

If you’re interested in exploring the different types of degrees offered by colleges and universities, you can do that here: Types of college degrees.

What Is a University?

A university is an institution of higher education that offers both undergraduate and graduate degree programs. Generally, universities are large – some enroll tens of thousands of students – and offer a wide variety of courses.

Oftentimes, universities are comprised of multiple schools or colleges, each dedicated to an area of study. For example, under the umbrella of Harvard University, we find the graduate schools Harvard Business School, Harvard Law School, Harvard Medical School, and so on. Similarly, under the umbrella of Cornell University, we find Cornell College of Business, Cornell College of Engineering, and so on.

The first definition of “college,” the one everyone thinks of is a higher educational institution. But the second definition is an organization of professionals in a specific area. So, when a university organizes its programs into Colleges, they’re using this second definition.

Are University and College the Same Thing?

The lines can really get blurred when you start talking about special degree programs such as a combined bachelor’s degree and master’s degree program. In most cases, these types of programs will be offered by a university since part of the program of study involves graduate-level study.

However, in everyday speech, most people use the two terms interchangeably. Both terms are used to describe any institution of higher learning, and few people differentiate between the two.

What Makes a College a University?

Some specialized universities don’t even offer associate’s or bachelor’s degrees. They only offer master’s and/or doctorates. They still count as universities because they offer graduate degrees.

When a college does begin offering graduate programs, it will often change its name to reflect the transition. It doesn’t have to change its name, though. Many schools value the tradition of their name and retain the “College” name. Others do change to “University” but keep the “College” name to designate a particular School or Department, typically the liberal arts programs.

This can create confusion when you have a College within a University, but just know that when a university uses the term “College,” it designates a set of programs that the university offers. They may also call these departments or colleges Schools, such as the School of Medicine at a particular University.

What Is the Difference between Community College and University?

Universities, on the other hand, offer 4-year bachelor’s degrees, as well as graduate-level degree programs. The types of bachelor degrees typically consist of either being a BS or BA degree.

The middle level, colleges, offer both 2-year associate’s degrees and 4-year bachelor’s degrees but do not offer master or doctorate programs.

While a 2-year associate degree is sufficient in some professions, most students use community college as a stepping stone on their way to earning a bachelor’s degree. They enroll at a community college to earn general education credits at a lower cost and then transfer to a college or university for their remaining two years.

What’s the Difference between College and University Accreditation?

Accreditation is the most important factor when choosing a school, and it works the same way and is just as rigorous for both colleges and universities. The difference is with a university, the accreditation board will also evaluate the school’s graduate programs.

Accreditation boards may also make exceptions. If they are evaluating a university, they may accredit the university with the exception of the School of Law, for example, until that department raises its quality.

Look for accreditation by one of these regional boards:

The Association to Advance Collegiate Schools of Business, for example, can accredit particular business programs or Schools. Such accreditation is in addition to regional accreditation, not a substitute for it.

You can see what accreditation a school has by searching on the US Department of Education’s website.

Can You Get Financial Aid for Going to Either University or College?

Yes, you can potentially get financial aid for going to either a university or a college. The only stipulation is that the school maintains proper accreditation. The government will not provide funding for a non-accredited school because there’s no guarantee that you’ll receive a high-quality education without the oversight of an independent accrediting board.

To see what financial aid you qualify for, fill out the Free Application for Federal Student Aid (FAFSA).

Which One is Better College or University?

Whether a college or university is the better choice for you depends on what type of degree you are pursuing.

If you’re looking to earn a bachelor’s degree, you can consider either option. Both colleges and universities may also offer fast online classes that last only 5 weeks to 8 weeks long. Even if you plan to pursue a more advanced degree later, you can earn your undergraduate degree from either a college or a university.

If you’re pursuing a graduate level degree such as a master’s or doctorate, a university is the choice for you.

What Is the Difference between a 4 Year College and a University?

Some might say that a community college offers the easiest college majors and degree programs, but that is not always the case. Many community colleges have been known to offer top-notch academic programs to help students prep for a 4 year university.

What’s the Difference between Harvard College and Harvard University?

Harvard University refers to the whole school, including all of its undergraduate and graduate level programs.

Harvard College, on the other hand, refers only to the undergraduate liberal arts program available at Harvard University. This is an example of a university organizing its degree programs into departments or Colleges.

Is Harvard a College or a University?

Both! Harvard University is comprised of Harvard College, the school’s undergraduate liberal arts program, as well as 10 graduate and professional colleges. You can learn more about the differentiation here.

What Is the difference between Columbia College and Columbia University?

Columbia University is made up of a number of schools, including its undergraduate liberal arts college known as Columbia College. Remember, the second definition of “college” is an organization of professionals. Universities often organize their programs by topics that are then administered and taught by the appropriate College for that subject area.

What Is the difference between Yale University and Yale College?

Yale University is comprised of fourteen schools, one of which is Yale College. Yale College is the university’s undergraduate liberal arts college. The university’s other schools are at the graduate level and include Yale Graduate School of Arts and Sciences and twelve professional schools.

Many universities started as colleges and may retain the name as a way to organize their original liberal arts program under the umbrella of the university. When a university adds a major department, that will often be called a College as well, such as the College of Business. Colleges can also be called Schools in a university.

What’s the Difference between College and University in USA?

In the USA, the terms college and university are often used interchangeably and refer to the same thing.

What is the Difference between University Education and College Education?

Both university education and college education can provide a foundation of skills and knowledge to help prepare you for a career.

At a university, you may pursue a more advanced degree such as a master’s or doctorate, while colleges usually only offer undergraduate degrees. You can, however, earn both 2 year and 4 year degrees at either a college or university. But a junior or community college will only offer 2 year degrees.

You may also be interested in our guide to the Best Majors in College.